This analysis piece was originally posted on our sister site totalfootballanalysis.com

Coming into the first Old Firm derby of the 2018/19 season there was a real sense that if the balance of power in Glasgow was not turning it was at least shifting more into the centre. Celtic under Brendan Rodgers had already dropped out of the Champions League to AEK Athens and they had enjoyed a difficult transfer window with their talented French forward Moussa Dembele departing for Lyon right at the end of the window. Rangers, on the other hand, looked revitalised under Steven Gerrard with impressive performances seeing them reach the group stage of the Europa League and making the team from the blue half of Glasgow extremely hard to break down domestically.

There was a sense though that to this point Gerrard had not been truly tested tactically. All of that would certainly change when he came up against Rodgers, a coach who has impressed with his tactical ability since moving to Glasgow to take charge of Celtic.

In the end, despite losing the match 1-0 this will be 90 minutes that will have taught Gerrard a lot about how to manage the game and how to make adjustments to counter specific tactical threats from the opposition.

What was most interesting about the match, in general, was the way in which Celtic were able to play through their opponent’s defensive structure using some clever movement and mechanisms. 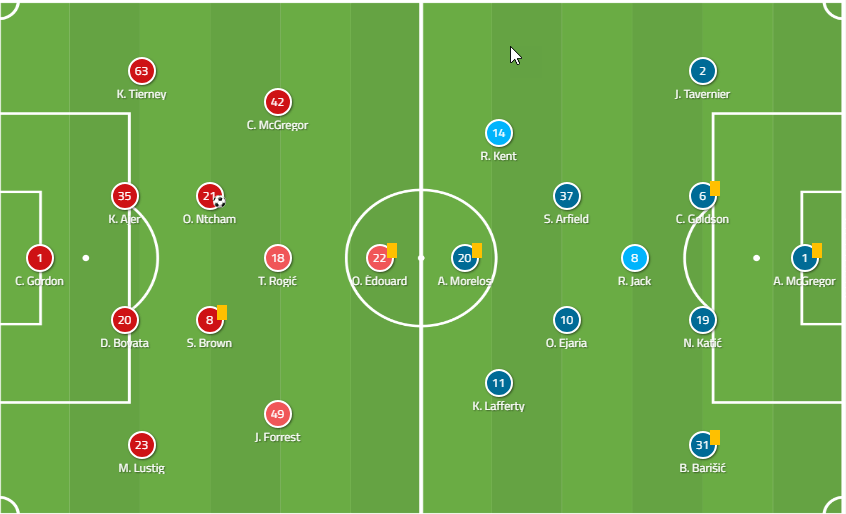 The team news from Celtic Park was nothing out of the ordinary, at least in terms of the team that Steven Gerrard sent out for Rangers. Gerrard opted again for the 4-3-3 that has served him well so far this season with the veteran Alan McGregor in goal and a back four of James Tavernier, Connor Goldson and Nikola Katic centrally and Borna Barisic on the right. The midfield three saw Ryan Jack as the deeper controlling midfielder. Ahead of Jack were Ovie Ejaria and Scott Arfield. The front three consisted of Ryan Kent and Kyle Lafferty in the wide areas with Alfredo Morelos as the lone forward.

The starting structure for Celtic under Brendan Rodgers was notionally a 4-4-1-1 but as the game progressed this structure quickly evolved, as we will see below. The goalkeeper was Craig Gordon behind an apparent back four of Mikael Lustig, Dedrick Boyata, Kristoffer Ajer and Kieran Tierney. In midfield, James Forrest was selected on the right with Scott Brown and Olivier Ntcham centrally with Callum McGregor on the left. Tom Rogic was selected just behind Odsonne Edouard.

As someone who completes opposition analysis for a professional team one of the hardest things is keeping track of positional changes and changes in the overall structure of the target of the report. Formations are largely useless in modern football with teams often adopting different structures depending on whether they are attacking or defending.

In the early stages of this match, it became clear that something that on paper looked to be a 4-4-1-1 structure was actually something very different, at least when attacking. On the right of the defence, Mikael Lustig was playing as an extra centre-back in the attacking phase whilst on the left Kieran Tierney was so high up the pitch that he was playing as a winger.

This, in turn, moved Callum McGregor in from the left side to play in the left half space behind Edouard with Tom Rogic taking up a similar position on the left with James Forrest outside of him. This positional movement combined with the presence of Olivier Ntcham and Scott Brown shielding the defence essentially meant that Celtic were attacking with at least four players in between the lines of the Rangers defensive structure in central areas.

Celtic use diagonal passes to break the lines

Throughout the match, we saw Rangers defend in a medium block with a relatively passive press. The midfield and forwards would look to press Celtic when in the defensive phase but only situationally when a Celtic player was facing his own goal or had taken a bad touch, and for the most part they looked to control the passing lanes to prevent Celtic from playing into deeper areas centrally.

Celtic, however, are extremely experienced when it comes to breaking down teams that look to sit deeper and block passing lanes. In this match, we saw Celtic use longer diagonal passes again and again in order to break through the Rangers defensive efforts. 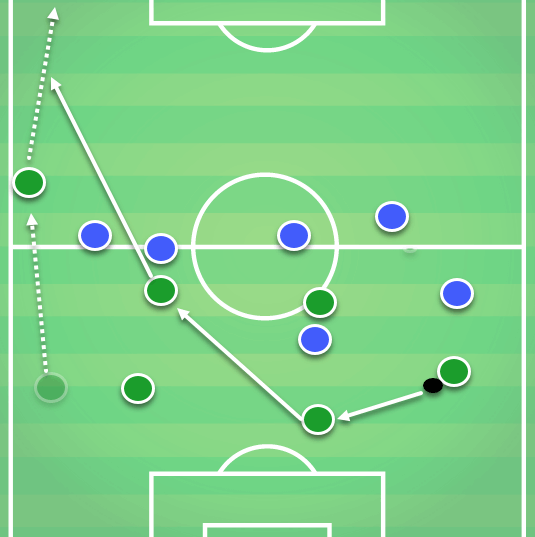 In this sequence, we saw Celtic switch the focus on their attacking movement from right to left but in a safe manner that saw them comfortably retain possession. The ball is shifted from Lustig from the right to Boyata who is in the centre of the three. Then we see the benefit of having Ntcham and Brown playing as, effectively, a double pivot at the base of the midfield. Morelos is shielding the ball to Brown but Ntcham is free to take possession.

When Ntcham takes the ball Tierney has already advanced into his high position in the attacking phase and Ntcham has the quality to play the pass diagonally through to Tierney on the left wing, one pass essentially took six Rangers players out of the equation. 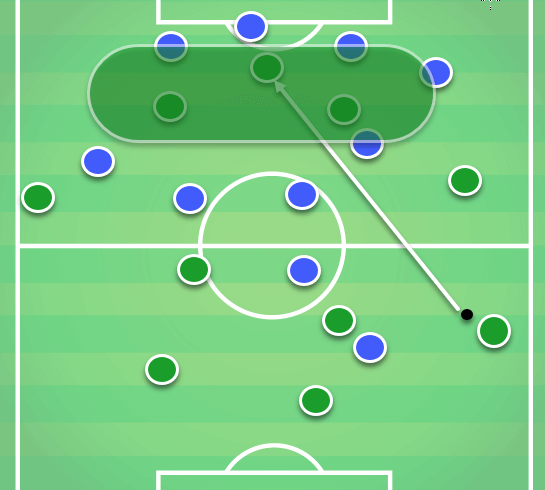 We see a similar type of movement here as once again Lustig stars the attacking pattern from the right back position. On this occasion, though Morelos has positioned himself intelligently preventing Lustig from looking to move inside with passes to either Boyata or Brown. Instead, he chooses to play a driven diagonal pass into the feet of Edouard who has dropped off from the front line.

This single pass takes six Rangers players out of the game and Edouard takes possession of the ball with both McGregor and Rogic in intelligent supporting positions.

With the positioning of Scott Brown and Olivier Ntcham in front of the defence and Calum McGregor and Tom Rogic behind the opposition midfield Celtic essentially had four players in space between the Rangers lines. This meant that the Rangers midfield enjoyed a thankless task for the entire match as they had to choose whether to press up to contain Brown and Ntcham in possession or drop back to cover the threat of McGregor and Rogic in behind.

The positioning of the central players saw Celtic manage to exploit space across the field with quick passing combinations moving the ball into dangerous areas in the final third. 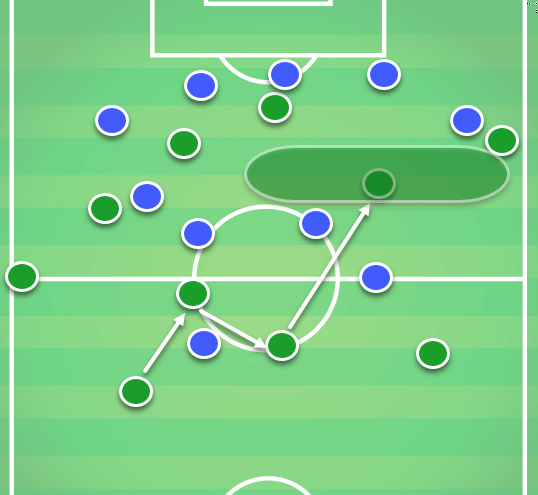 In this example we see Celtic using a simple up, back and through movement in order to progress the ball to Tom Rogic who is in the final third in space. 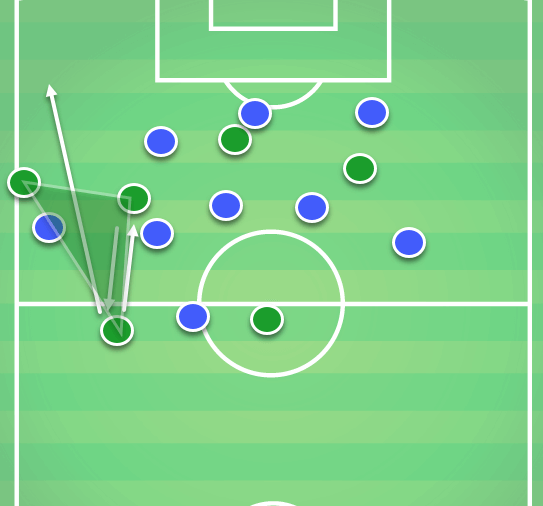 This time we see Celtic breaking through using a similar ball movement to the above. With Ajer progressing into the Rangers half with the ball he plays a simple and short vertical pas to Ntcham before receiving the ball straight back.

This simple exchange of passes freezes the two closest Rangers players and makes them consider pressing Ajer. This slight pause is all that is needed before Ajer can play the pass through to release Tierney on the outside.

Whilst at 1-0 the scoreline was close the match itself was anything but. Celtic had a plethora of chances to finish the game but they were denied by some inspired goalkeeping and resolute defending.

Tactically this is a match that Steven Gerrard will learn a lot from when completing his own post-match analysis. The real test for the Rangers manager will come when the two teams meet again and he has to set his team out once again against this Brendan Rodgers side.