This post originally featured on our dedicated all around the globe football analysis site, totalfootballanalysis.com

A title-chasing Rangers side failed to dispatch a depleted 10-man Dundee who were sitting uncomfortably at the bottom of the Scottish Premiership table. This valuable point has lifted them from their relegation spot. A lack of imagination, partly due to the absence of Alfredo Morelos meant that the Glasgow giants were unable to convert their high possession into any chances: let alone goals. Here’s a tactical analysis of the match focussing on the aspects that must be addressed should their title hopes remain alive. 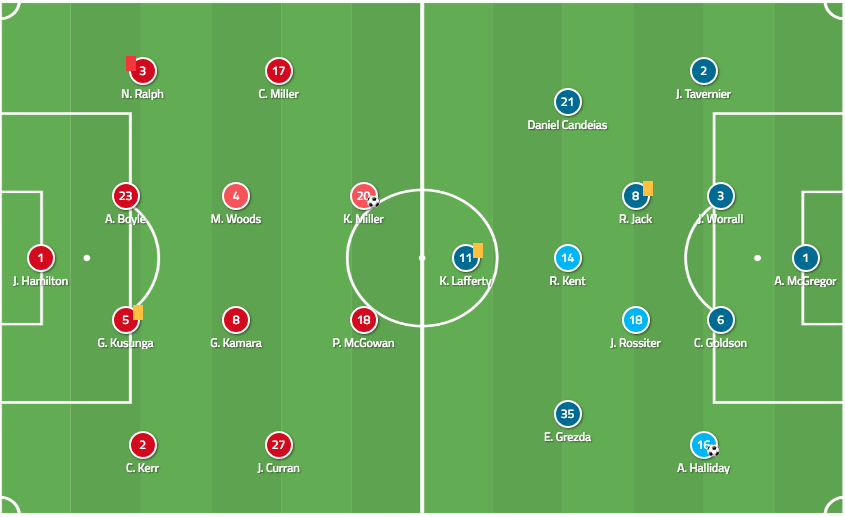 Gerrard’s starting line-up was well-received by fans before kick-off. Needing three points and four goals, the attack-heavy starting 11 was an aggressive statement of intent. Despite the approval, it lacked balance and, in the end, any real creativity or cohesion. The 4-2-3-1 was geared to offer variety moving forwards but Jim McIntyre’s Dundee side had other plans with a 4-4-2 that sometimes drifted into a 4-5-1 as they defended deep.

With only four shots, two of which were on target, Dundee still managed to get a goal. Naturally, it came from former Rangers star Kenny Miller who has increased his streak to six goals in four games. It arrived on the ninth minute after a hopeful long-ball came from Nathan Ralph at the left-back position exposing Joe Worrall’s poor defensive position. 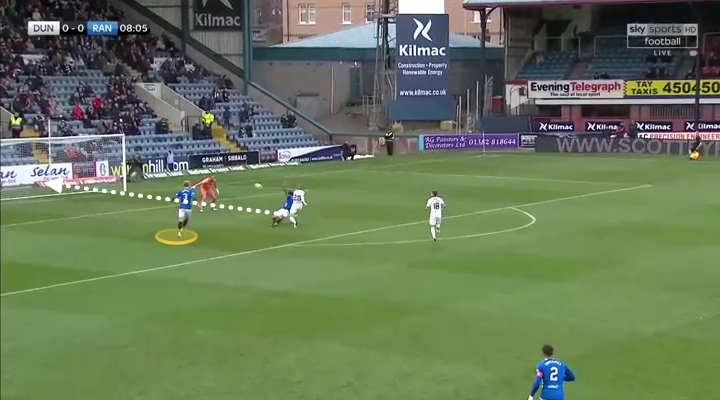 Rather than marking the space behind Kenny Miller or putting pressure on the striker, Worrall floated to the half-space leaving unmarked territory in front of goal. His pace let him down in recovery and a fumbled attempt at stopping the attack from his central partner Connor Goldson left it on a plate.

Goldson had already been pulled out of his position by sticking too closely to his man too high up the field. He was favourite to get to the ball here but in an uncharacteristic error, he failed to clear the danger.

Although part of a two-man Dundee attack, the 38-year-old former Scotland international was a key player, using his experience to make life difficult for the defence in his traditional number nine role. He was able to run amuck as Dundee fired long balls in his direction. Despite the lack of threat, too many half-chances became chances due to Rangers poorly organised back-line. 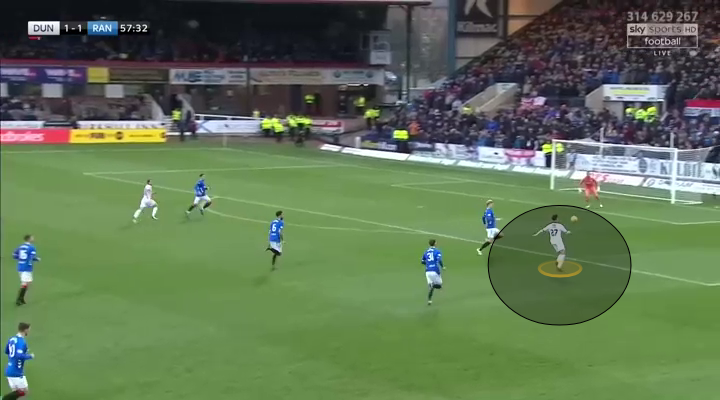 At the other end, despite playing most of the match with an extra man, Rangers didn’t cope much better against a well-organised Dundee defence. Despite the suspended striker’s absence, Gerrard packed his side full of attacking talent. The Rangers boss seemed to overlook his opponent’s ability to defend though.

His side’s inability to break down teams that are willing to sit back has been a recurring issue this season. Without Morelos as the spearhead, Rangers look considerably less threatening. 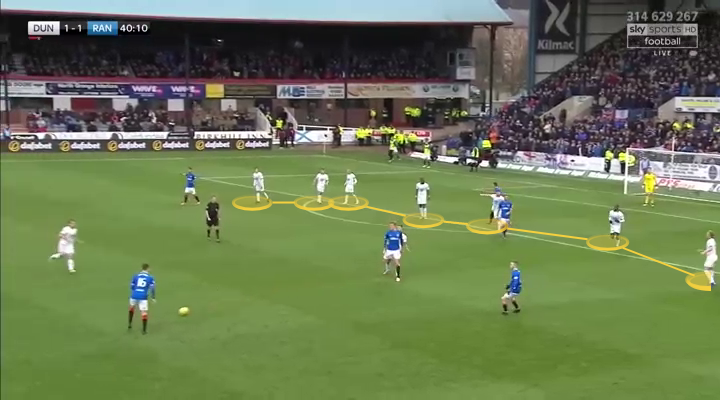 In a highlight of the match, Lafferty had a well-created and taken goal wrongly disallowed. It was yet another attack that began with Tavernier who, finding space, played a perfectly weighted pass to in-form Ryan Kent who teed up the Northern Irishman in the six-yard box. It was a rare lapse in Dundee’s defence and the incorrect offside call proved costly for the Glaswegian side. 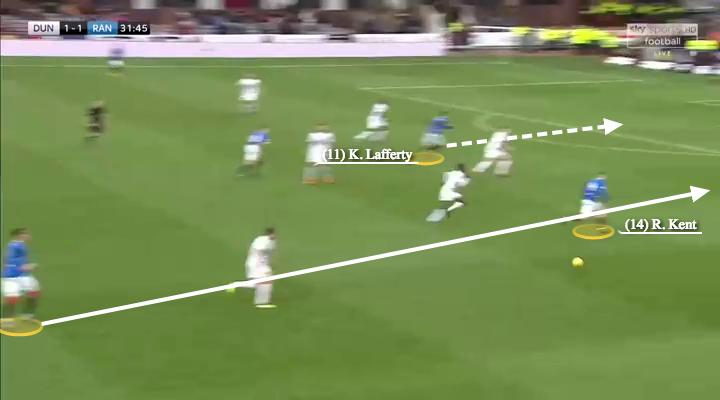 Lafferty is a constant thorn in Premiership defender’s sides. His unorthodox physicality makes his movements difficult to predict. Combined with pace and a depth of experience in the league: he can be a serious threat to sides like Dundee.

Although he looked lively early on, he was under-utilised by the Rangers supporting players. During his spell at Hearts, Lafferty clocked up 13 goals last season with many of them coming from unsightly route one long-balls.

As a target-man, he was expected to collect and convert and often did. Dundee were the perfect side, having leaked 33 goals in their first 16 matches, for Gerrard to employ Lafferty in such a talismanic role but Dundee’s central defenders largely kept him quiet.

Tavernier builds from the back

Rangers lack of spark at the front was partly negated by the dynamism of full-back James Tavernier. Throughout the season, numerous attacks have been instigated from this position, a mainstay of Gerard’s playing philosophy.

Dundee manager Jim McIntyre managed three draws in his last four outings against Rangers (with former side Ross County), so it seems that he knows how to dampen the Glasgow side’s attacks. His side sat deep all game, limiting the impact of Rangers attacking line. With numbers concentrated deeper in their own half, Tavernier had the freedom to move the ball forward with dribbles and linked up with Daniel Candeias on the wing well.

Sitting atop the assist table with 6 compared to his xA of 6.09, Tavernier is always looking to create. Without the over-performing Morelos and Scott Arfield, the captain had to help drive his side forward. Less technically adept teams have sat back against Rangers this season and when they do so, Gerrard’s men have struggled to break them down. It’s no surprise that the majority of chances started with him. 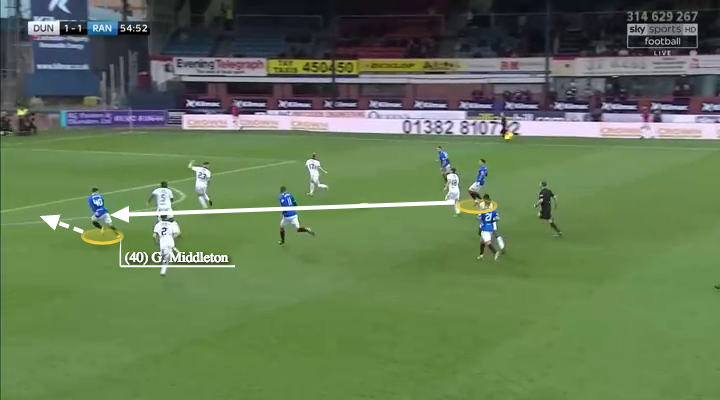 There were two outlets for attacking in this match: Tavernier building from the back and crosses coming in from the wing. It was predominantly from the right side where Candeias was able to find space and play balls in.

Although Gerrard builds up a lot of attacks from the full-backs down the wing, this approach was as much to do with his gameplan as it was McIntyre’s defensive masterstroke. Rather than marking the numerically and technically superior Rangers side too closely, he employed a narrow system of containment whereby his squad would overload the box, forcing play out wide.

Rangers should have been able to better work the central and half-spaces, but a lack of imagination and cohesion seemed to limit their opportunities. When play was built through the wings, Dundee’s numerical advantage in the box meant that crosses were not meeting their targets.

With the highest goals scored in the league, 38 in only 16 games, Rangers have been very impressive at times. However, coming off the back of a loss to Aberdeen and without their key-man Morelos, the side looked predictable. The attack-heavy starting line-up was an oversight on the manager’s part and he has rightly condemned the players for their failure to create chances whilst acknowledging his own poor decision-making after switching up the side.

In what was possibly Rangers‘ worst performance of the season, there were very little positives to take from the game other than Tavernier. His willingness to attack combined with his accurate passing makes him a real threat from a deep position. Gerrard will have a lot of work to do, both with the players physical and mental performance, before their crucial Europa League tie on Thursday. Although, in their last outing when they faced Villarreal, the side were impressive. It is possible that this is just a temporary dip in form, however, they can’t afford to drop points in such ties as the league goes on.

For Dundee, who have found a bit of form recently, their sharp defensive work showed promise. Although they’re far from safe from relegation, they are certainly coming onto a game and are in good stead to build on recent performances.

If you love tactical analysis, then you’ll love the digital magazines from totalfootballanalysis.com – a guaranteed 100+ pages of pure tactical analysis covering topics from the Premier League, Serie A, La Liga, Bundesliga and many, many more. Get your copy of November’s issue for just £4.99 here or preorder the first of TWO December issues right here.