Steven Gerrard will be feeling a mixed bag of emotions after his Rangers side fell 1-0 to a fairly innocuous Rapid Wien. Rangers needed a win here to progress, with the home side only requiring one point. This put the onus on Gerrard’s men to bring the match to them. Frustratingly for the Glasgow side, apart from one brief spell in the first half they largely failed to do that.

It wasn’t all bad news for Gerrard though, although fans might see it that way. His side were well organised in defence, a far-cry from their last league outing against Dundee. He now has to focus on challenging Celtic for the top spot in the league. Here’s a tactical analysis of the positives and negatives of Rangers tie against Austria Wien and how they should aim to move forward. 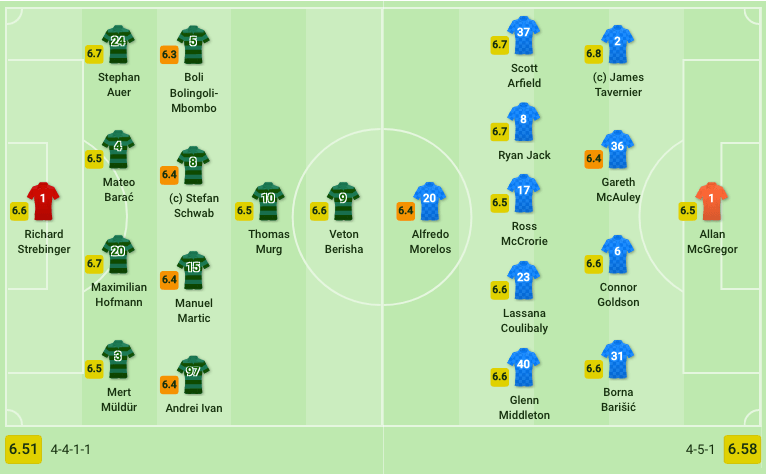 Rangers initially lined up in a 4-3-3 but the two wide attackers, Glenn Middleton and Scott Arfield, quickly dropped slightly deeper. After a shaky defensive outing against Dundee in the league at the weekend, Gerrard dropped Joe Worrall from centre-back and paired Connor Goldson with Gareth McAuley. They briefly switched to a 4-4-2 when Kyle Lafferty was substituted on in the 79th minute to support Alfredo Morelos in attack.

In the league, Rangers have been scoring for fun. Goals have been a little harder to come by in European ties though. After serving his suspension, Morelos returned alongside another key-player in Scott Arfield. Morelos, the sides top-scorer, was a key man when the sides last met. Rangers, after a late flurry, walked away 3-1 victors at Ibrox. There was very little in common with that performance here.

Rangers, knowing they had to win, had one shot on target in the whole match. There were seven shots, of which four were off-target and two blocked. None of those came from Morelos. That’s not to say he was poor. The Colombian forward looked hungry at times and was trying to create something, finishing tied top with team-mate Tavernier for dribbles (4). However, with only one blocked shot to show for his match, Gerrard will need to get more from his man.

Rangers main positive movements once again came from full-back and captain Tavernier. Utilising the full length of the pitch and stretching play on the wings, he created overlap opportunities and managed to tee up his own shots and crosses. His perfectly placed 21st-minute free-kick was narrowly missed as Goldson hit the woodwork with a header. A chance of his own came close on the 80th minute, giving the keeper his toughest test of the match. 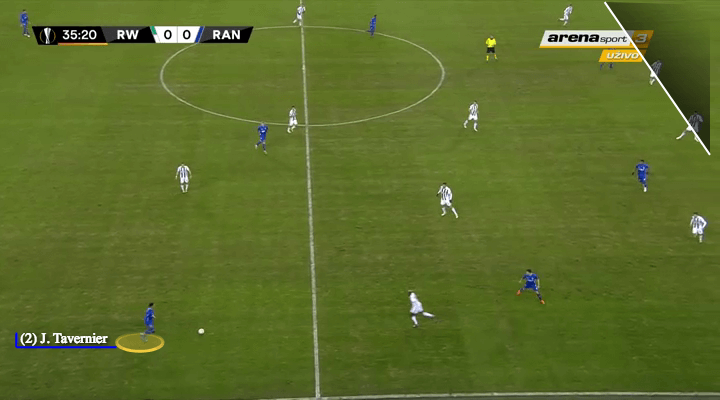 He was rightly rated as the top player on SofaScore and WhoScored. Despite a low pass success rate of 64%, he made sure to move the ball forwards whenever the chance presented itself.

Another interesting statistic was the 8.6% of total possession he had on the ball, the most out of both sides by quite a bit. He won the most aerials on the pitch (8) and the most tackles (7) whilst also making the most successful dribbles.

Tavernier managed to touch the ball 121 times, also the highest by some way, compared to the second-placed Stefan Scwab with 78. While not proof of success in and of itself, his presence and intent were always there. Not immune from errors, when they occurred he always strove to recover. His past few performances has cemented his place as a key-player in Gerrard’s line-up here.

Strong at the back

The Rapid Wien goal was a result of a poor goal-kick from Allan McGregor and the particularly deft interplay between substitutes Christoph Knasmüllner and goal-scorer Dejan Ljubicic. Despite the goal, Rangers were chalk and cheese from their 1-1 draw against Dundee at the weekend.

There were two key aspects of the defence. Firstly, clearly atoning for their recent erroneous ways, Rangers defence tightened up immensely. The midfield was willing to drop deep to compact the space between them and the defence. Rapid Wien struggled to move between the lines and were often forced to back-track.

Although always careful to retain their shape at the back, Rangers also limited their opponent’s attacking options by using a simple overload to rule out the most obvious passes. By grouping together this way, it made pressing easier and this constant pressure forced errors from Rapid Wien. Again, the usual response was to move the ball backwards.

The second way that Rangers defence contributed to their overall fair showing was through centre-backs Goldson and McAuley. They’d receive the ball from the keeper and build from the back, creating a wide base which attracted the opponent’s players to contest the ball. Opening up space higher up the field utilised the full-backs in Gerrard’s preferred mode of wide play. 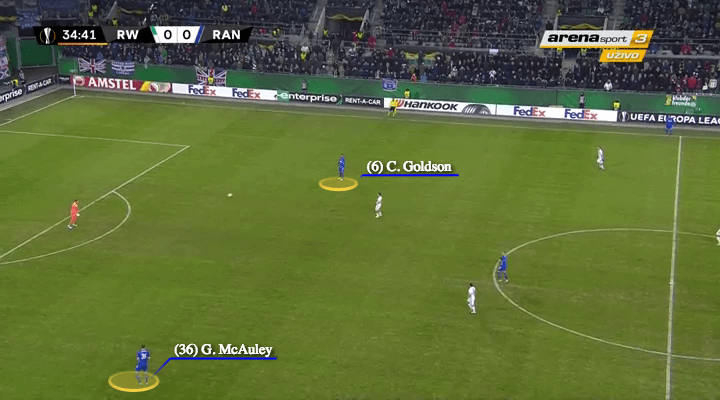 There was a five-minute period leading up to the end of the first-half where Rangers managed to retain possession and build up something of an attack. However, this was unsustained and certainly didn’t repeat in the second half. The side have only managed three goals in their last five games now and, despite their early goal-scoring form, look like they’ll struggle against a well-organised defence: whatever level that may be.

On a plus note for Gerrard, captain Tavernier was once again in great form and was a leading light in causing his opponents trouble and helping the defensive transition. Concerns around Rangers defence were unquestionably quelled in this tie. If they can continue this way domestically, teams will struggle to find the net. Unfortunately, Rangers seem to be suffering from that very same issue as well.

If you love tactical analysis, then you’ll love the digital magazines from totalfootballanalysis.com – a guaranteed 100+ pages of pure tactical analysis covering topics from the Premier League, Serie A, La Liga, Bundesliga and many, many more. Get your copy of the FIRST of two December issues for just £4.99 here or preorder the SECOND of the December issues with an annual membership right here.