This article originally featured on totalfootballanalysis.com, our flagship analysis covering players, managers and matches from around the world.

One of the biggest rivalries in world football was on show on the 29 December, The Old Firm. This was a tale of the two giants of Scottish football. Celtic have absolutely dominated Rangers in the recent past, with their last defeat coming more than six years ago. A novice manager in his debut season against a manager of great experience; his old boss. The leader against their closest challenger. Scotland stopped to watch this one.

The game finished with Steven Gerrard’s men on top, with the only goal of the game coming from Ryan Jack on the half hour-mark.

One of the main components of Rangers’ victory was their ability to press high up the pitch, not allowing Celtic any comfort in their play. Steven Gerrard did not let Celtic have any comfortable possession, even at the back, and instructed his players to constantly harass Celtic on the ball. One of the pressing triggers was the ball back to Craig Gordon, which pushed the Rangers team up and allowed them to defend man to man with Celtic’s center-backs as well as in midfield.

Subsequently, the full-backs were left as the free men, forcing them to hit longer passes. which gave the players time to recover into their position if the press was beaten. An important part of the pressure was Scott Arfield’s man marking of Scott Brown, a key member in Celtic’s playing out from the back.

This acted as a signal for the other two midfielders to push up onto their rivals in the middle and not let them turn. Rangers were very proactive with their pressing and regularly followed through when Celtic played the ball backward, closing the outside, forcing them inside.

By following through and pressing the receiver so quickly and aggressively, Rangers were able to cut the playing angle for the Celtic player immediately, making it difficult to play forwards comfortably to a free man. This constant pressure stopped Celtic from settling into a rhythm and forced multiple mistakes in possession, especially from Boyata who had a very shaky game in possession despite usually possessing plenty of composure on the ball.

A key feature of the match was Celtic’s inability to contain Rangers’ threat with the ball, overloading the sides at every opportunity. 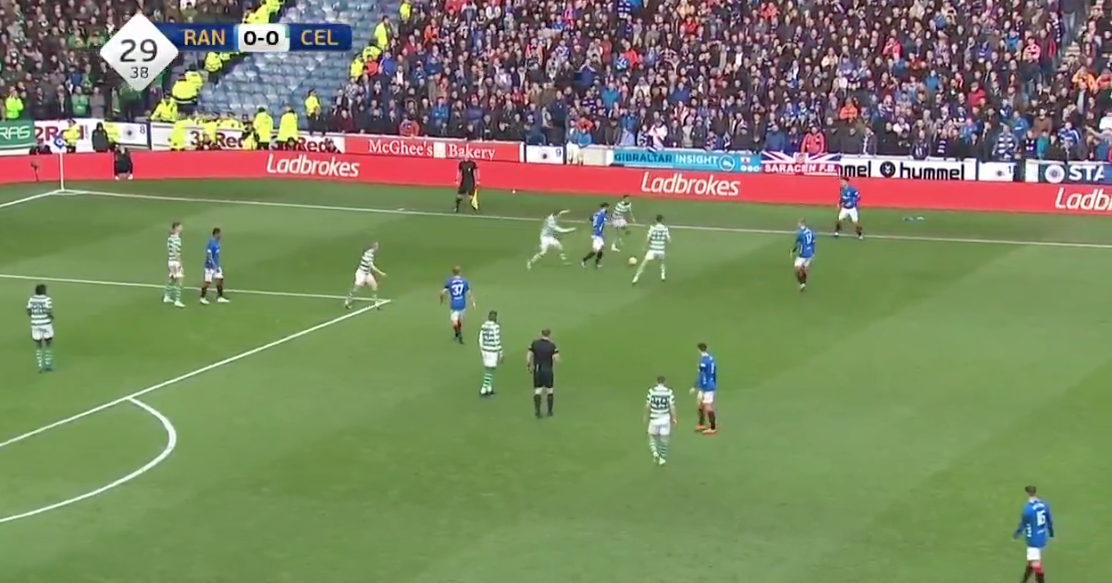 Rodgers elected to play with two central midfielders and a number 10, unlike Rangers’ last four opponents who have all played with a flat 3 in midfield. This allowed Rangers to create a 3v2 in wide areas, with Halliday, Jack, and Kent vs Forrest and Lusting on the left; Tavernier, McCrorie, and Candeias vs Sinclair and McGregor on the right, with Scott Arfield occupying both of Celtic’s central midfielders.

This strategy enabled Rangers to be a threat out wide and put in a number of dangerous crosses. After Rangers created a few clear chances in the first half, the visitors adapted by having one of their central midfielders shifting across and matching Rangers’ numbers in wide areas.

Realizing this, Gerrard’s men overloaded one side and waited for defenders to arrive. Having removed the pressure and switched it to the other side, they were able to isolate the opposite winger, which created the only goal of the game. 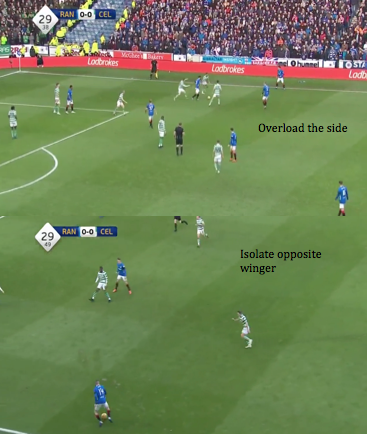 Set up for transitions

In preparation for Celtic pushing their full-backs and sustaining attacks, Rangers were perfectly set up to counter-attack as soon as they won the ball. They used the tireless forward runs of Kent and Candeias as an option, utilising their pace to gain a dynamic advantage over their defenders and get in behind the defensive line.

Morelos was always ready to go in behind, peeling off the shoulder of the defender on the side of the ball on every occasion.  This helped stretch the pitch, creating space for Arfield in the 10 position to run into, and build a base for the transition. Jack and McCrorie were key in these transitions, often winning the ball off Rangers’ counter-press and starting the counter-attack with an excellent forward pass.

One of the biggest tactical switches in the game was made by Brendan Rodgers after introducing Edouard and pushing Sinclair into a centre forward, which involved playing with a diamond in midfield, creating a 4v3 overload in the middle of the pitch. This enabled Celtic to always have a free man in midfield, allowing the central defenders to play through the man-to-man pressure Rangers were applying in the middle.

From there, the Celtic full-backs pushed forward and provided an option out wide when one of either Candeias or Kent would try to engage in the middle. As a result, McGregor found space on a couple of opportunities to finish on goal and bring the game level.

Former Liverpool legend Gerrard responded to this change by replacing Candeias with Coulibaly and going to a diamond as well, matching up again in midfield. This change reinstated Rangers’ midfield press, denying Celtic any space in the middle and as a result they were able to assert their dominance once more. 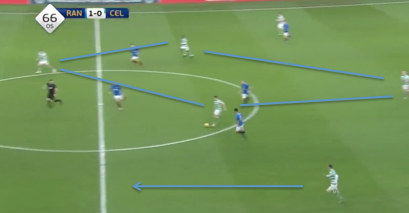 Rangers produced one of the most complete performances of Gerrard’s reign in which they were dominant in all phases of the game. Led by their midfield’s incredibly energetic performance, Rangers chased and harried Celtic all over the park and stopped their opponents from getting a strong foothold in the game.

On the other hand, Rangers seemed to always have a solution on the ball, whether it was to create 3v2s down the sides or to overload one side and isolate the opposite winger. The difference in finding a solution to the opponent’s pressing was ultimately the key distinction between the two sides. With the title race in full flow, Rangers can now start to believe they can put an end to their Glaswegian neighbours’ dominance.

If you love tactical analysis, then you’ll love the digital magazines from totalfootballanalysis.com – a guaranteed 100+ pages of pure tactical analysis covering topics from the Premier League, Serie A, La Liga, Bundesliga and many, many more. Get your copy of the FIRST of two December issues for just ₤4.99 here, or the SECOND of the December issues with an annual membership right here.